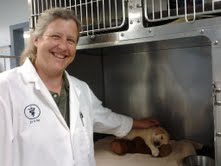 Dr. Connor began her career early in life. One of her family chickens was attacked by a dog and when they called the local vets, no one worked on chickens! So, at ten years old, Dr. Connor performed her first surgery. Things snowballed after that.

Dr. Connor graduated from Virginia Tech with a Bachelor’s Degree in Animal Science in 1987 and from the Virginia Maryland Regional College of Veterinary Medicine in 1991. She has lived in the Shenandoah Valley for 14 years. She grew up horse-obsessed and planned to become an equine veterinarian, but after becoming involved with a canine Search and Rescue (SAR) team in Harrisonburg in 1996, that quickly faded.

Currently, Dr. Connor is involved with Blue and Gray SAR Dogs, where she is the training director. She has also served as the president of the team and has had the opportunity to travel both nationally and internationally. She and her SAR dog, Finn, have gone to New Orleans after Katrina and to the jungles of Guyana, South America to search for a missing plane. Her extreme interest in SAR has caused her to become a more canine sports-oriented veterinarian.

Dr. Connor has been trained in Veterinary Acupuncture and plans to pursue training in Veterinary Chiropractics. At this time, she is owned by her five Labrador retrievers, two horses, and five cats.

Call our sister hospital, Compassion Animal Hospital, at 540-439-9016 to set up an appointment!